Sergio Perez is ending every grand prix weekend wishing it had only just started, as he is finding it “very hard” to get up to speed in his Red Bull Formula 1 car.

Perez is still lamenting the reduced pre-season schedule that gave him just one-and-a-half days in the RB16B following his move from the Racing Point team over the winter.

Apart from a front-row start at Imola, Perez has struggled to match team-mate Max Verstappen in qualifying and a combination of a shoulder complaint and his general discomfort in the car led to a lowly eighth-place start in last weekend’s Spanish Grand Prix.

That set Perez up for a “frustrating” race in which he was able to rise to fifth but finished behind the Ferrari of Charles Leclerc and was nowhere near close enough to assist Verstappen’s failed victory bid.

He said after his poor qualifying that his result was the most he could achieve, and that he has finished each grand prix this season feeling much more confident with the car. 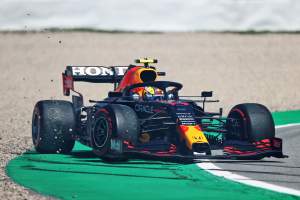 “Every time I get to the end of the weekend I wish the weekend was just starting now,” said Perez.

“With how limited track time is these days, it’s very hard to get up to speed.

“But I think this weekend was a particular [bad] one. Not being able to be at my 100% [in qualifying] makes a big difference.

“[I will] just forget this one and come back again in Monaco, learn from what we’ve done and hopefully come back stronger.”

Perez was signed by Red Bull to replace Alex Albon, who did not offer the team the point-scoring and podium-challenging performances it needed from its second driver.

So far, Perez has struggled to do much more, although he does have six points more than Albon did at this stage last season.

Back in the season opener, Perez got knocked out of Q1 and started from the pitlane after his car cut out on the way to the grid, then recovered to fifth.

At Imola, where Perez qualified so strongly, he had a miserable race in the rain-hit grand prix and finished outside the points.

“It just takes me a bit too long to get up to speed when we get to a new circuit, adapting my style” :: Sergio Perez

Perez started alongside Verstappen on the second row in Portugal but his race was compromised when he fell behind the McLaren of Lando Norris early on.

He was switched to an awkward strategy in that grand prix, extending his first stint to keep him in a window to benefit from a potential safety car and ultimately switch to softs and try to claim fastest lap and the bonus point with it.

“It’s important to keep making those steps and putting the whole weekend together,” said Perez.

“It just takes me a bit too long to get up to speed when we get to a new circuit, adapting my style.

“I’m not there with the car yet. You see that things are coming, but not together. 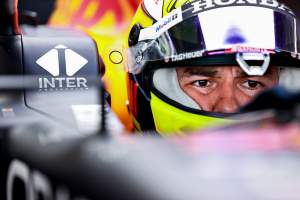 “Once we are able to put them together, we have the pace to be able to go pretty quick.”

Perez said he is still studying Verstappen’s data to learn how to drive the car and what he needs to do to adapt his driving style to the Red Bull.

The RB16B, which is a high-rake car, is a very different concept to the low-rake Racing Point that Perez became a race winner with last season – and also generates lap time in different ways.

“That’s the thing that I’m working on the most,” said Perez. “And every circuit is different.

“It’s not like you learn something here [at Barcelona] that will work in Monaco.

“That’s the main thing, I’m still adapting with my style. And hopefully soon we can be able to be at 100%.”