Fernando Alonso will have his first taste of the 2020 Renault RS20 running on race-specification Pirelli tyres in the one-day young driver test in Abu Dhabi on Tuesday, but his participation is not without controversy.

Alonso previously sampled the 2020 car on a promotional day in Barcelona in October, running on the demo-spec Pirelli rubber. He was also restricted to just 100km, with his subsequent running in the 2018-specification Renault RS18.

Ahead of his racing return with the team, which will be rebranded as Alpine next year, Renault lobbied the FIA for dispensation to run Alonso in the one-day test, which was previously ringfenced to allow only drivers with no more than two grand prix starts to participate. This created controversy, with Ferrari lobbying unsuccessfully for new signing Carlos Sainz and Racing Point having wanted to do the same with Sebastian Vettel. But the FIA did not move the goalposts any further.

“It’s very much a human thing that we’re doing for Fernando,” said Abiteboul when asked about the benefits of the test by The Race. 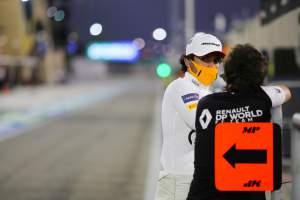 “When Fernando also decided to come back to Formula 1, he was been very clear that he wanted to have as much mileage as possible under his belt before next year.

“The regulation put a clear limit to that, so we’ve done quite a lot, four days with a two-year-old car, and also we thought it would be a nice thing to be able to do that with a current car.

“We asked and the FIA approved it, as simple as that. And that will be an opportunity for him to see the evolution in two years because a two-years old car we’ve also specced a detuned engine, with tyres that are demo tyres, that are not really representative. It’s good – but this will be much more representative of what we expect next year.

“The car will be changing more than people tend to report for next year, with a small change to the aerodynamics, which is something that we can’t test next week.

“But for the rest it’s about him getting into the team, understanding our process, our procedures, the steering wheel and also getting familiar with his engineers and I understand that the dynamic is already very, very good, very, very strong to have as much as possible a good start next year. Bearing in mind we have only three days of winter testing.”

Alonso is one of three drivers who are set to race in F1 next year that are participating, along with Haas’s Mick Schumacher and AlphaTauri’s Yuki Tsunoda, although the latter has yet to be officially confirmed in a 2021 race seat with Red Bull’s junior team.

WHO IS PERMITTED TO DRIVE?

Originally, the post-Abu Dhabi Grand Prix test was scheduled to run over three days. This would include at least one day devoted to tyre testing for each team, as well as the requirement to dedicate “one or two days” to young drivers.

But as part of the reshaping of the sporting regulations after the COVID-19 pandemic hit, the test was cut to one day with teams but restricted to young drivers. In this case, young drivers are not defined by age but by the rule stating they may not have contested more than two grands prix

The rules were further relaxed to allow drivers who have not raced in 2020, regardless of age and grand prix experience, to compete. This means only 11 of the drivers appearing satisfy the original criteria for participation laid out in the sporting regulations.

WHO ARE THE NEWCOMERS?

Six of the 15 drivers participating in the test are having their first official outing in contemporary F1 machinery.

WHAT CAN THE TEAMS DO?

The regulations prevent teams using this test to experiment with new parts thanks to rules stating that the car must run in “an identical configuration to that used in at least one race during the current championship year”.

The rules do permit exceptions if it’s to accommodate specific drivers in the car, or relating to component availability problems, but this rule precludes the running of experimental parts. 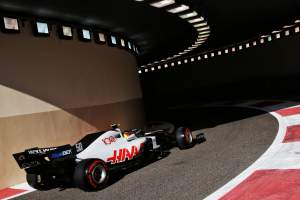 However, there are advantages in terms of preparation for next season. For example, Haas has yet to decide which crew will work with which driver next season. It is running Mick Schumacher in its one car in the test, but having placed him with Kevin Magnussen’s side of the garage for his free practice outing in FP1 with race engineer Gary Gannon, Haas will have Schumacher work with Romain Grosjean’s crew and race engineer Dominic Haines in the test.

This will help with making the decision of which crew Schumacher and 2021 team-mate Nikita Mazepin will work with next year.

WHO IS NOT RUNNING?

Eight teams are running, with Racing Point and McLaren both opting to skip the optional test.

However, both would have been keen to do so had they had the opportunity to run 2021 new signings Vettel and Daniel Ricciardo.

But while the FIA gave dispensation to non-active race drivers such as Alonso, Vanodoorne Robert Kubica (Alfa Romeo) and Sebastien Buemi (Red Bull), to appear, it declined requests to lift all restrictions.

WHAT TYRES ARE THEY USING?

Each driver has seven sets of 2020-specification Pireli slicks available, split between five sets of C4s and two of C5s.

There are also two sets of intermediates and one wet set available in the unlikely event of rain.

15 mins ago No Comments

3 mins ago MotoGP No Comments