Stoffel Vandoorne says he was “cruising” to his third Formula E victory for Mercedes in the second London E-Prix of the weekend before he was wiped out by an errant Oliver Rowland.

The first half of the race was controlled by Vandoorne, who only briefly dropped out of the lead on lap 10 when he’d conceded the lead to his team-mate Nyck de Vries by activating attack mode.

De Vries made it easy for Vandoorne to reclaim a lead he’d hold until the second safety car was deployed for the start/finish straight clash between Antonio Felix da Costa and Andre Lotterer.

Lucas di Grassi then made a controversial ‘pitstop’ to jump into the lead ahead of Vandoorne, Rowland and de Vries.

But as Vandoorne followed an under-investigation di Grassi, Nissan e.dams’ Rowland locked his brakes into the right-hand Turn 10 hairpin and ploughed into Vandoorne.

Ex-F1 driver Vandoorne suffered damage and dropped out of a likely race win and down into 15th place at the chequered flag.

OH NO! A lockup from @oliverrowland1 sends him straight into @svandoorne dropping them both down the field..

“It’s a tough one to take today especially because we were the quickest car out there today,” a dejected Vandoorne told The Race.

“I qualified on pole, had awesome pace. Everything was under control and I was kind of cruising, just maintaining a little gap behind.

“To be taken out like this, just really hurts. Nothing I can do.”

The incident was particularly heart-breaking for Vandoorne given his last pole was followed by an opening lap clash with Lotterer in the first race in Rome.

At Valencia, Vandoorne lost pole because of a tyre-related administrative error and on the next day, he charged from 19th into the top eight, only for a collision with Sebastien Buemi to end his race.

The 29-year-old hasn’t stood on the podium in eight races – his longest Formula E podium drought since he made his debut with HWA Racelab in December 2018.

“It’s definitely the most painful one. I had a little bit of a tough day yesterday after the aquaplaning [led to a crash] in FP2, then I really had to pull everything out today to be up there.

“I was very proud of myself after quali and I had the race under control as well. Just massively frustrating, and only two races left and the gap is quite big now.” 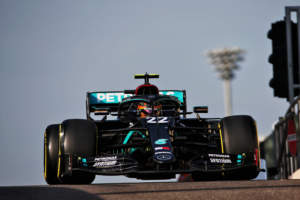 Rowland accepted full blame for the incident as his penultimate weekend with the Nissan e.dams outfit yielded a disqualification and a lowly 18th place finish.

“Completely my fault,” Rowland told The Race. “Cold brakes, trying to defend a bit from Nyck, misjudged my braking.

“Had nowhere to go but into the side of him. Completely my fault, he couldn’t have done anything.

“Likewise, as soon as I realised that I locked the front, I was a bit of a passenger as well. I’m sorry to Stoffel and my team.”

Rowland sits 36 points off the championship lead in 16th place, while his Nissan e.dams team – runner-up to DS Techeetah last season – is currently 10th out of 12 teams.