The deeper story behind the first all-Audi powertrain

The powertrain in the FE07 car that Audi has unveiled for the 2021 Formula E season is the first it has designed and built internally.

And it’s a key technical package that is going to inform Audi’s future in global motorsport.

Lucas di Grassi and Rene Rast will drive in FE07 in Audi’s fourth full season as a factory entity.

But it will be the first time that the powertrain has been provided direct from Audi Sports headquarters in Neuberg, Germany.

Previously, Audi used several suppliers, including the Compact Dynamics company which is owned by the Schaeffler Group.

Schaeffler remains as a technical partner with the Audi Sport ABT Schaeffler entry but is not directly supplying parts within the powertrain cluster now.

The move to take the technical aspects fully in-house at Audi headquarters was always part of a long-term motorsport strategy that is set to spread way beyond its present programme in Formula E and apply across the board for Audi motorsport.

Getting that process underway has involved some experienced EV specialist engineers being brought in and some also sourced from internal Audi training programmes.

The decision to accelerate and grow internal capabilities in electric motorsport was made in early 2018 and has now borne fruit with the Audi e-tron FE07.

By 2025, Audi plans to unleash more than 30 electric models which will account for 40% of its sales.

It is a company with ambitions and targets to become a business that it says will offer ‘fully CO2-neutral premium mobility – with the aim of assuming the leading role among competitors’.

It also plans by 2025 to reduce the carbon footprint ‘of the vehicle fleet across the entire lifecycle’ by 30% compared to 2015.

Practically the changes have made Audi more agile, with quicker reaction times to situations that it hopes will prevent repeats of problems such as its bizarre inverter issue which wrecked di Grassi’s title defence in 2017/18.

From a technical standpoint Tristan Summerscale, as Formula E project leader, believes that the new FE07, which will be in situ now for two full seasons, is the most advanced and efficient design ever completed at Audi Sport.

“What I find particularly impressive is the tight packaging that has been achieved,” said Summerscale.

“If you compare the weight of the MGU and the inverter, it is under 35 kilogrammes to the equivalent power output of a similar internal combustion engine, this is definitely the lighter and more efficient solution.

“The complete efficiency of this powertrain is over 95%, so quite a remarkable number.

“And again, compared to an internal combustion engine powertrain, that’s more than double the efficiency.”

The move to a self-sufficient technical model comes just at the time the VW Group is completing reviews of its future motorsport programmes.

This will include Audi’s future in Formula E for the Gen3 era which begins at the end of 2022 but which has to be committed to by next spring at the latest.

The Race understands that a decision on whether the VW Group, which is the only OEM to have two brands in Formula E as Porsche is also present, will continue with two entities is to be made imminently. 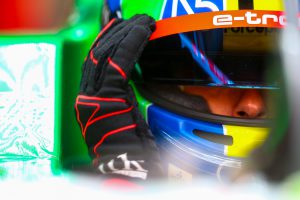 Audi has earmarked 50% of its marketing budget for topics ‘centred on electric mobility’, but the word within Formula E is that the series could lose two present manufacturers ahead of the ninth season in 2022/23.

With some initial design work on Gen3 models already underway, the clock is ticking to see which teams may fall by the wayside.

Whatever is decided, it will be against the backdrop of a perfect storm during a disastrously unforeseen pandemic that has crippled some industries added to a significant transition to electric mobility.

Ultimately it will come down to just how robust the two VW brands are, both at present and in forecasts for the next decade at least, to decide if both Audi and Porsche can continue to race on the same grid.

49 mins ago MotoGP No Comments