Powell took part in the 2020 rookie test with the team and had already agreed a deal to run in the 2021 equivalent before the calendar changes led to it being cancelled.

It is understood she made a strong impression on the Envision Virgin team at that 2020 test and is highly-rated by the squad. 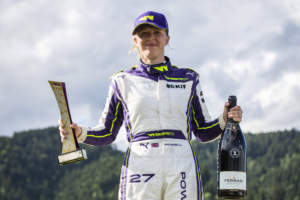 Under the role of ‘official simulator driver’, Powell “will also be helping with development work, race preparation and commercial activities” according to a team statement.

The role will take on increased importance for Envision Virgin because its current factory partner Audi is withdrawing from Formula E at the end of this season, with the team keeping its customer cars for one more year before the Gen3 tech era begins.

The team’s managing director Sylvain Filippi said: “We have already seen her performance and what she can deliver during the rookie test she did with us and are very pleased to have her onboard.

“She brings with her a lot of skill, determination, and some fantastic experience behind the wheel.

“I have no doubt that she will constitute a very valuable asset for us, and the team is looking forward to working with her.”

“I have already worked with quite a few of the guys when I did my rookie test in 2020 and I am super excited to be part of such a fantastic team,” said Powell.

“I’ve seen how hard everyone works at the factory and to have this opportunity to help the team, who have a great driver line-up as well in Robin and Nick, is incredible.

“We have a great car and great drivers, and I am very proud to be able to support the team in the simulator and contribute to the results.”

Powell has won two of the three W Series rounds held so far in 2021, with her home victory on the British Grand Prix bill at Silverstone last weekend putting her back on top of the standings by six points over 2019 champion Jamie Chadwick.

She has electric racing experience from contesting the final season of the Formula E-supporting Jaguar I-PACE eTrophy in 2019/20, in which she finished fourth.

Powell told The Race last year that she was sure her performances in the initial W Series season – where she won the Brands Hatch finale – had put her on the radar for opportunities like the Envision Virgin deal.

“I can’t say specifically that ‘oh yeah because of W Series I am 100% having these opportunities’. But it’s certainly helped,” she said.

“It’s helped kind of put my name back out there again and people go, ‘oh yeah, I remember Alice’.

“So that has been something where it’s kind of propelled me back into the world of racing again, when I’m not just kind of sat on the side of a track coaching someone.

“So it’s helped me in that way and I’m really excited for the future.”

There was only one unbroken team/driver partnership from the start of Formula E still together. But now that's over. Sebastien Buemi looks back with Sam Smith as he leaves Nissan e.dams for Envision

16 hours ago No Comments

Formula E has reached a preliminary agreement with Tokyo for a race to be stage in the city from 2024, as part of a wider alternative-fuels mobility festival

Two race-winning Formula E squads are hunting for new team bosses for 2023. And there are plenty of contenders in the running, including some former Formula 1 names

13th in the standings with a single podium was not representative of just how impressive Rene Rast's rookie Formula E season was. And while he was unjustly absent from the grid in 2022, he's getting a well deserved second chance with McLaren