Pato O’Ward took his first pole of the season for Arrow McLaren SP, but reliability issues would strike the Mexican.

He led the whole of the first stint ahead of McLaughlin, while his team-mate Felix Rosenqvist, who had taken third from Colton Herta early, had an apparent engine failure.

Then shortly before his first pitstop O’Ward also started to struggle for power.

It was initially diagnosed as a gearbox issue but looked to be trouble with getting fuel to his engine, so for the second race in a row O’Ward fell foul of reliability after losing a Chevrolet engine at Road America last time out.

O’Ward’s aggressor McLaughlin claimed the lead after a caution concluded the first round of stops, which Palou used to nail a brilliant undercut to take second ahead of Herta.

Also in that period Rinus VeeKay delivered one of the moves of the season going past Josef Newgarden and Scott Dixon at Turn 6 to claim fourth having started 11th and undercut his way into contention.

A caution for Tatiana Calderon stopping on lap 53 of 80 – which also led to O’Ward stopping on pit road with the conclusion of his issues – then took Herta out of contention because he didn’t pit in anticipation of the caution.

“You need to use the codeword,” he said, as the pit road closed while he was still out on track and he stayed out with 27 laps on his stint, before an almost immediate caution for McLaren-bound Alexander Rossi thrice hitting Andretti team-mate Romain Grosjean, the second touch putting both drivers off, meant Herta had to pit and dropped to 18th.

Then Grosjean hit Herta on the restart, spinning Herta out, with Grosjean getting a drivethrough penalty for that.

Rossi also hit his other team-mate Devlin DeFrancesco, which also earned a drivethrough.

It meant all Andretti cars were hit by at least one other Andretti car in this embarrassing race for the team’s drivers.

The final caution set up an 18-lap run to the finish with McLaughlin leading Palou and Penske’s Power who started 21st but used an early clean-air undercut strategy and general rapid pace to leap a group of cars into the top 10 early on.

But even on the soft tyres versus the hards of the top two, Power struggled to erase the gap and it was a McLaughlin-Palou fight to the finish just like in McLaughlin’s first IndyCar win at St Petersburg earlier this year. 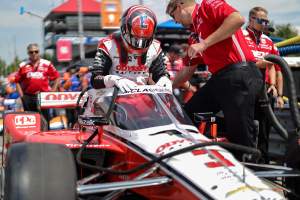 With his family – unable to come to the States for two years until the Indianapolis 500 due to New Zealand quarantine rules – in attendance, McLaughlin delivered the perfect performance to hit peak form after a rollercoaster run in the series.

Ganassi’s Palou – who won at Mid-Ohio last year – rebounded from a collision that put him out at Road America last time out to lead home Power, who scored vital series points from his second in the championship position.

VeeKay’s race was defined by that huge move on Dixon and Newgarden. The Ed Carpenter driver took his second best result of the season in fourth ahead of Dixon.

Helio Castroneves had one of his more memorable road course races of the season in eighth, ahead of rookie David Malukas’s best finish of his rookie season for Dale Coyne with HMD.

22 hours ago No Comments

2 mins ago MotoGP No Comments