How did he do it? How did Pato O’Ward fly from fifth to first in just five laps of racing after the final restart in the second race of IndyCar’s Detroit double-header – dismissing Graham Rahal, Alex Palou, Colton Herta and Josef Newgarden in ultra-quick succession?

Where was he finding the grip to pull off his series of bold moves, while rivals were, as Palou put it, “all fighting against the walls, not trying to spin or to crash” after the caution period?

The 22-year-old Mexican does, as his part-time team-mate Juan Pablo Montoya highlighted after seeing his data in testing, have some pretty intense steering inputs. But there’s clearly more to it than that.

Rivals (half-)joked that Arrow McLaren SP must have found some tyre warmers for O’Ward to use during the yellow – or more realistically, had a set-up trick that was allowing it to generate tyre temperature quickly for restarts. 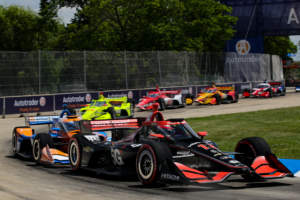 That’s certainly Ganassi’s theory, and Palou says his team is onto it and ready to do the same.

But he also warned that warming the tyres so fast works them hard. Palou thinks the key to O’Ward’s Detroit win was also why he’s ended up uncompetitive in other races this year, such as his 19th and 15th places in St Petersburg and on the Indianapolis road course, and what necessitated the errant three-stop strategy that turned O’Ward’s Barber Motorsport Park pole into fourth place.

“It’s basically what we’ve been seeing all year, that they were able to switch the tyres on in one lap, and that’s why he’s always up there on qualifying,” said Palou.

“But that’s also why he had to do an extra stop in Indy road course, in St Pete. There’s a compromise, right?

“It worked really good this weekend, and we need to find that compromise, but we think we know what it is now. Not before but now.

“So we’re going to try, and if we can get that right, it’s going to be really fun.”

Detroit’s run of late yellows would’ve helped ensure O’Ward still had plenty of tyre life to make play his ace warm-up card with when it counted in the final shootout.

“It was wiggly, but I felt like I still had life in the tyre available,” said O’Ward, in one of the most endearing descriptions of a car’s handling on old tyres we’ve heard in a while.

But anyone mirroring Arrow McLaren SP’s set-up tactics successfully also needs to match the O’Ward factor. Because as the evidence stacks up, the case for him being a superstar gets more compelling.

It looked convincing from the outset, when he arrived on the IndyCar grid for a one-off with Harding Racing in the 2018 season finale after clinching the Indy Lights title and qualified fifth before finishing ninth.

The detour he had to take when his expected full-time seat with that Andretti-affiliated squad fell through and then Red Bull toyed with getting him on the Formula 1 ladder disrupted 2019, but he then led the first year of the SP team’s McLaren incarnation and ended his first full IndyCar season fourth in the championship.

And now he’s a double race winner (the only one of 2021 so far) and the championship leader.

The way he’s achieved it counts for more than those plain stats too. Oliver Askew’s 2020 in the other AMSP car and his replacement Felix Rosenqvist’s start to 2021 both look unimpressive, despite Askew’s big reputation from the Road to Indy ladder series and the talent Rosenqvist’s shown across global motorsport over many years. Will we look back on their fortunes in the future and conclude it wasn’t that they were underperforming, and more about the team-mate they were up against?

Palou doesn’t just credit O’Ward’s surge past him and everyone else in Detroit to a trick set-up (though he does think that’s what gave his rival the decisive advantage).

“He’s not crazy. He doesn’t divebomb from like 50 metres away, so he’s really good.

“You know when he’s behind and he has a better car that he’s going to overtake you. I think we’ve been really good on overtaking, as well.

“But the thing is if there’s a driver that can switch on the tyres because driving skills or because of the set-up, then that driver looks outstanding compared to all others.”

O’Ward’s attitude on and off track plays into that too, though.

It’s hard not to be reminded of past CART/IndyCar heroes Montoya and Alex Zanardi in how O’Ward carries himself on track.

One of Montoya’s key advantages on his way to his shock title as a rookie in 1999 was the speed he could show on cold tyres after restarts. Both he and his double champion Ganassi predecessor Zanardi were also ultra-incisive – sometimes too much so – with overtaking as well.

O’Ward’s description of how he planned his flurry of overtaking – which also included a move on reigning champion to get up to fifth at the preceding restart just before – and how he responded to some coaching from AMSP president Taylor Kiel was very revealing. 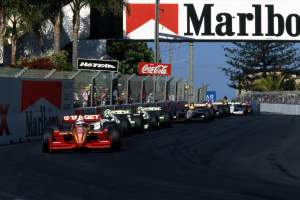 Could modern IndyCar rival F1 like CART did?
Read more

“I knew I only had one chance to get every single guy,” said O’Ward.

“I couldn’t spend three chances on Dixon. It had to be one.

“So every time I would pull out or do something, I had to take the risk of pushing the braking zone or getting that mega exit to be able to get in front of them.

“I was very happy with how I executed it.

“The problem is whenever you let people step around over you, then it becomes a habit.

“People know that I’m not here to be fifth or sixth. They know I’m here to win. I’m pretty sure that’s the message that we portrayed today.”

The aforementioned Kiel has been a major asset for O’Ward’s nascent title campaign as his strategist.  He has been a great tonic to the Mexican on the radio, a constant relaxed voice to reign the excited O’Ward in and keep him focused on the bigger picture – while making sure to encourage risk-taking when it’s warranted.

“I didn’t forget the words that Taylor said. He’s like, ‘OK this is the caution, everybody is going to stack up, lapped cars are going to go, blah blah blah. If you have a chance, take it, but if you don’t, keep the championship in mind’.

“But in my head, the two guys that I’m fighting the championship with are in front of me, and I was not going to be pleased if we ended behind them, especially if we had a restart and we were all together.

“So if I had the chance I was going to strike. I just had to make sure every strike wasn’t like, ‘Oh, am I going to get it?’ No, it had to be like boom, definite. Once you’re on the inside, it’s yours.

“I think they were very clean passes. I don’t think I put anybody in jeopardy in ways of ‘hey, I screwed your race’ or anything.

“I knew I was racing around very professional drivers, very clean, hard racers. I was around people that you can get within less than an inch of and race.”

If you haven’t seen the last few laps of that race, it’s worth having a look to see just how O’Ward put his thought process into on-track practice. His passes were certainly no-nonsense, and did require some cooperation at times, but as Palou said, they certainly weren’t crazy.

Don’t look now, but there’s a new Championship Standings leader after the #DualInDetroit.

You can have a tyre life or tyre temperature advantage and make nothing whatsoever out of it if you haven’t got the imagination to work out how to use it, or the racecraft to make it happen cleanly in reality. O’Ward has all of that in bucketloads.

He’s got an appealing attitude that’s on the right side of cockiness, answering the question “can you believe you’re the championship leader?” with a huge grin and a confident “yes I can”.

And his playful semi-heckling of Palou (“I’m giving you a compliment!” “I don’t want it, it’s my moment!”) – when he arrived in the post-race Detroit press conference just as Palou was being asked about how O’Ward was overtaking him – bodes well for a fun rivalry between the pair, who are, incredibly, looking like they could make the 2021 title fight their own.

Their contrast in styles will be entertaining if so. Palou isn’t shy about overtaking and can’t be totally painted as a calculating Alain Prost to O’Ward’s Ayrton Senna, but he also acknowledged that he’ll be going about the championship run-in a bit differently to O’Ward.

“I know he’s going to be really exciting driver, and I’m going to be more calm,” said Palou.

O’Ward one point ahead of Palou at the season’s halfway point. Proven champions Dixon and Newgarden looking just behind them. Teams racing to figure out and copy the set-up they think is key to what O’Ward can do at Arrow McLaren SP. O’Ward confident he can show his results are much more about a state of mind and those “fast hands” than a clever set-up.

The scenario is just what this already brilliant IndyCar season needed.

22 hours ago No Comments

33 mins ago MotoGP No Comments